How Does Salt Soften Water?

Before investing in a water softening solution, it is worthwhile to spend some time understanding how ion-exchange works, what role softening salt plays in this process, and how effective these systems are.

You’ve probably heard of water being described as “hard” and may understand hard water tastes, feels, and acts differently than water that isn’t hard. But why is water hard and what does water hardness mean exactly?

Water becomes hard through a natural process. When water falls as rain it contains little mineral content, but as it moves through soil and stone it picks up mineral ions. This is because water is an excellent solvent. When water passes through stone or soil rich in minerals it dissolves some of the ionic bonds of the minerals it comes in contact with, picking up mineral ions along the way.

For more insights on how to remove salt from water and water softener alternatives, visit our page.

What Minerals are in Hard Water?

Any mineral can contribute to water hardness, but some minerals are much more common than others. Calcium and magnesium are the two most common minerals found in hard water in the form of bicarbonates, sulfides, and sulfates.

Metals can also cause your water to become harder. One of the most common metals found in hard water is iron, which can cause reddish-brown stains on surfaces and bathroom fixtures. Other metals like lead and aluminum may also be found in hard water.

How is Water Hardness Measured?

Water isn’t either hard or soft, but rather water hardness is better thought of as a spectrum encompassing varying levels of mineral content. This is important because many of the impacts of hard water will be worse or more noticeable if your water is very hard.

The actual mineral content of your water is determined through a water test. The most common type of water hardness test will measure the content of calcium carbonate, communicated as the number of grains-per-gallon (GPG) of calcium carbonate in your water. This measurement is then compared to the water hardness scale, which offers different thresholds for water depending on its mineral content. This scale provides a useful way to describe how hard or soft your water is.

Water is considered “soft” if it contains less than 1 GPG of calcium carbonate. 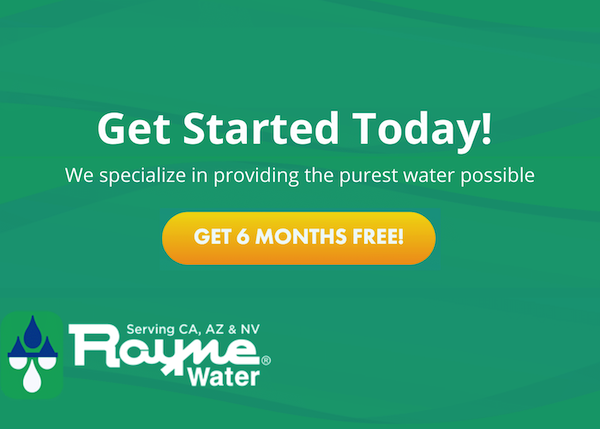 How is Water Softened?

Most whole-house water softeners use a process known as ion-exchange to remove the mineral content from hard water. These systems offer an effective way to reduce the mineral content of water without using physical filtration methods like reverse-osmosis, which makes them ideal for providing large amounts of soft water. If you have wondered, “how does salt soften water?”, the answer is through the process of ion-exchange.

The water leaving the system is soft and the hard minerals which were in the water are left behind on the resin beads. Periodically these systems need to be refreshed because all of the space for minerals to attach to is taken up. This is where the brine tank comes in. To regenerate the system the resin tank is flushed with salt water from the brine tank. This causes the salt in the brine to take the place of the minerals on the resin. The minerals and brine solution are then flushed from the system and down the drain, and the system is ready to begin the softening water treatment again.

Salt-free systems offer an alternative to ion-exchange systems, but function in a fundamentally different way. Salt-free systems like the Rayne Spartan Series are known as water conditioners rather than water softeners.

These systems use something called template-assisted crystallization (TAC) media. Unlike ion-exchange systems that remove mineral ions from hard water and replace them with sodium ions, systems using TAC media don’t remove minerals from the water. Instead, a water conditioner changes the hardness in water to a crystalline structure which doesn’t cause scaling.

Scaling is the process where hard water deposits the minerals it contains on surfaces it passes over or through. These deposits are an insoluble precipitate, making them durable and difficult to remove or clean. The scaling caused by hard water is directly responsible for the most common hard water effects seen in residential and commercial buildings.

With conditioned water, the hard minerals in the water form seed-crystals which then attract other minerals in the water instead of coating the surfaces and fixtures around your home. The minerals are more attracted to the nano-sized seed crystals than the other surfaces they come into contact with. The best salt-free water softener, which is actually a water conditioner, will provide an end result where water still contains minerals, but those minerals don’t form scale.

There are many benefits when comparing a salt versus salt-free water system. Both of these methods of softening water are highly effective at reducing the impact of hard water around your house. If you aren’t sure which type of softener system is right for you, it is probably worthwhile to talk to a water quality expert at Rayne Water.

Many people find the use of salt in an ion-exchange system problematic and wonder how much sodium in softened water provided by their systems. While the water produced by ion-exchange systems does contain sodium, it is only a small amount. The exact amount added to your water depends on how hard water was before treatment, so providing an exact amount is difficult. Sodium (Na) is also distinct from salt (NaCL), which is worth keeping in mind.

Most healthy adults won’t have an issue with the sodium used to soften water, nor will they taste it. However, if you are concerned about the amount of sodium in softened water you can consider adding a reverse-osmosis system at your kitchen sink to provide filtered drinking water. Not only do reverse-osmosis systems dramatically reduce a wide range of contaminants contained in water, but they also remove the sodium used to soften water.

Salt-free systems may be advantageous for reasons other than not using salt. Because they don’t use softening salt, these systems are great for areas with brine restrictions in place. Some areas greatly restrict the discharge of brine, like the type used in ion-exchange systems. Usually, these types of restrictions exist in arid regions or areas experiencing drought.

Salt-free systems also don’t require electricity or drainage like ion-exchange systems. This can make the installation process easier in some situations.

Salt is critical for water softening systems that use ion-exchange. These systems remove the minerals in hard water and replace them with sodium ions. This process is gentle, natural, and is excellent for providing soft water to an entire home or building.

Concerns about the sodium levels in softened-water are generally unwarranted. The sodium content in softened water is low and doesn’t affect the taste of the water. However, for individuals with health concerns, the sodium used to soften water can be removed with a reverse osmosis system. Alternatively, in areas with brine restrictions, salt-free solutions like the Rayne Spartan Series which rely on TAC media to crystallize the minerals in hard water can offer a great way to avoid the harmful impacts of hard water.

To learn more about water softening solutions and if water has a taste or not, please contact Rayne Water today.