New Killer In Our Water? 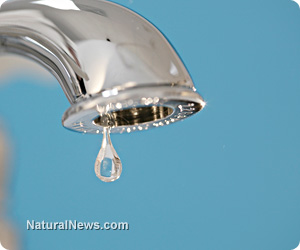 Natural News: Toxic shock: California allows up to one thousand times more glyphosate in drinking water than needed to cause breast cancer in women Learn more:[/caption] It may be something that they don’t want you to know, but there is a new danger lurking in our tap water here in California called glyphosate. Known to be dangerous to human health, the state still allows levels which are above and beyond the risk of creating cancer cells in breast tissue. Glyphosate is a synthetic compound that is a nonselective systemic herbicide, particularly effective against perennial weeds. While it may kill unwanted weeks, it may also be killing woman by increasing their risk of breast cancer tremendously. Recent studies have found links between low levels of exposure to the herbicide and the proliferation of cancer cells. Without the protection of a home drinking water system, you may be exposed to deadly contamination without even knowing it. Naturalnews.com author Mike Adams recently exposed the information published in Food and Chemical Toxicology, where the study is entitled, “Glyphosate induces human breast cancer cells growth via estrogen receptors.” The bottom line? Glyphosate multiplies the proliferation of breast cancer cells by 500% to 1300% even at exposures of just a few parts per trillion. Even the minimal exposure should be regulated by federal and state standards at levels that do not produce such a serious risk for cancer. The problem is that in California, the allowable exposure level was nearly 50% higher than the federal EPA level. That’s right – the state standard is much higher the EPA’s standards putting you at risk for health conditions linked to consumption of foods or tap water contaminated with glyphosate. As the article explains, other recently published studies demonstrate glyphosate’s toxicity to cell lines, aquatic life, food animals, and humans. What is known as the “parts per trillion” study shows cancer cell proliferation being caused by ultra-low concentrations of glyphosate. Scientific studies report the dangers of genetically modified crops and their related chemical herbicides. Would you filter your tap water if you knew your water was contaminated with this herbicide? Consider our drinking water filters as an option for quality drinking water and eco-friendly technology. Leading the market, we use the most advanced filtration technology to effectively remove contaminants both regulated and unregulated from the tap to provide your household with a consistent flow of great-tasting, high-quality drinking water. What happens next? The ultimate goal is for California’s legislature to lower state standards for allowable glyphosate levels. But without the funding and support, this is not a short-term goal. Households should take matters into their own hands by installing a home drinking water system and avoid deadly contaminants once and for all. To read the article, click here.]]>